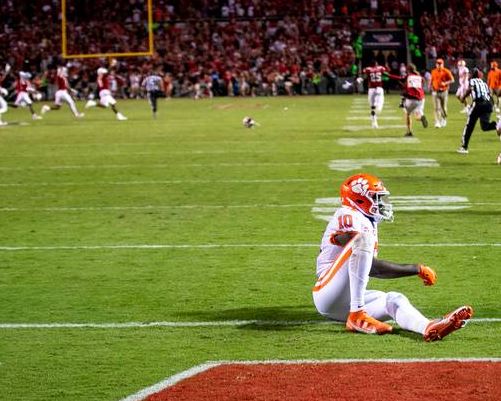 That went off the rails quickly.  Clemson suffered a second loss in the month of September.  A team that has been a model of consistency and reloading for the past decade, has finally fallen on some hard times.  It looks like Alabama is the only team that can keep churning out amazing teams year after year.  Clemson is 105th in the nation in scoring at 22.3 point per game.  Honestly, I was surprised to see it that high.  That probably tells you what sort of struggles they are going through.  They are 5th in the nation in defensive scoring at 12 points per game, but if you can't score, that doesn't matter.  Oklahoma fans were booing their quarterback that was a Heisman favorite a few weeks ago.  The Sooners are still undefeated, but it feels like they are on the brink of dropping one of these close games.  Not that USC was a serious contender at this point, but getting blown out at home to Oregon State is not a good sign for the state of the program - even after signs were bad firing their coach after the second game.

The SEC is always good, but it looks like they might have the 2 best teams this season.  Alabama and Georgia are clearly a cut above the rest.  People will say Alabama is showing signs of vulnerability after only beating Florida by 2, but that's ridiculous.  Florida is a good team too and Alabama went on the road and beat a top 10 team.  That should count for something even with Alabama's sky high expectations every year.  Georgia and Florida are going to be playing one of their bigger match ups when they meet at the end of October.  But Georgia has to get through another top 10 team first when they play Arkansas this week.  I think people were expecting an improved Arkansas team this year, but what they have done so far is probably beyond most people's expectations.  It seems very likely the SEC will get two teams in the Playoff this year with how other things are playing out so far.

I don't think anybody is getting in from the ACC.  Oregon probably has to go undefeated to make it, and Oklahoma needs to go undefeated as well.  Maybe someone from the Big 10 will make it, but they always end up beating up on each other.  This really could be the year Cincinnati makes the Playoff and the Group of 5 is finally represented.  But they have a huge game against Notre Dame they need to get through.  Week 5 is shaping up to be a great weekend of games with big impacts.