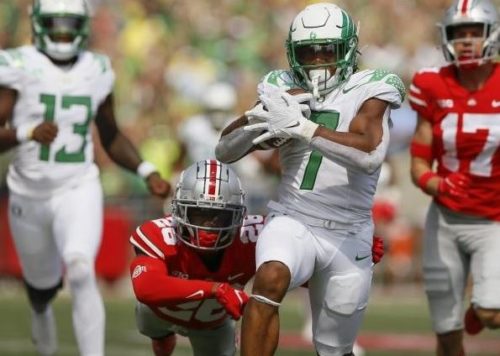 The weekend with a lack of top 25 matchups went ahead and produced an early season, landscape-altering result in the big matchup of the week as Oregon took down Ohio State on the road.  This is more a of boon for Oregon than it is a death knell for Ohio State.  If there is anything we have learned in the past, it's that brand name programs get the benefit of the doubt for an early season loss.  When it comes to determining the Playoff spots at the end of the year, don't be surprised if Ohio State is right there if this ends up being their only loss.  Oregon on the other hand solidified its spot among contenders, but appear to have no margin of error going forward.  The PAC 12 is not looking too great in terms of strength of conference.  USC getting walloped by Stanford is not a good sign.  Utah was downed by BYU.  Oregon's supposed major roadblock in the North, Washington, is already 0-2, after their loss to Michigan.  Maybe Michigan can finally step up and take down Ohio State's grip on the Big 10?  Probably not.

The Big 10, however, looks to have quite a bit of depth this year.  Iowa went on the road and took down rival Iowa State in a top 10 matchup.  That is hard to do.  Maybe this is one of those Iowa years where they are undefeated after 10 weeks and everyone is wondering how in the world did that happen.  Penn State is looking like a contender, but they have a big test against Auburn next week.

Texas is not back...again.  Let the snide remarks and jokes fly as SEC-bound Texas got destroyed by bottom-tier SEC team Arkansas.  I guess if they don't leave the Big 12 for a few seasons, they have some years to get their recruiting up to the level to compete for a middle of the pack finish in the SEC.  Oklahoma looks like the Big 12's only hope for a Playoff berth this season.  Iowa State will not get the benefit of the doubt like an Ohio State after a loss because they don't have the history behind them.  Plus they might lose a few more games anyway if they can't get their offense going.

We have one more week of not a lot of quality matchups before we get heavy into conference play.