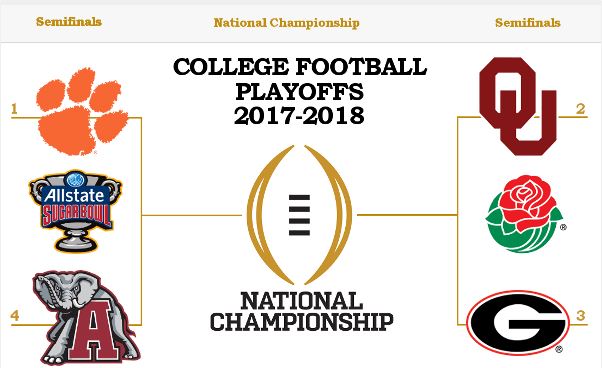 So we have it.  The College Football Playoff is set and we once again can't go a year without Alabama in the Playoff.  We told them not to worry about not even winning a division in their conference, because as we saw with Ohio State last year, that doesn't mean you can't make the Playoff.  The SEC got two teams in this year and the mighty Big 10 has been left out.  Will the Playoff expand to 8 teams next year?  Luckily for the Big 12, their conference championship game didn't knock out their Playoff participant.  Somehow it finally worked out for that conference.  If everyone can get past debating who should have been in the Playoff, we can look at the actual match ups and realize it's a pretty good field.  We've got Clemson and Alabama facing off for the 3rd year in a row.  And what an accomplishment by Clemson.  They lose the best player in their school's history after winning the national championship and they made it back to the Playoff.  No small feat.

Georgia is the actual SEC champ this year and it's not very often you don't hear much about them.  All people want to talk about is the west division runner up Alabama.  Will that help them or hurt them?  Who knows, but their match up against Oklahoma is a classic offensive versus defense.  The defense usually wins out in these situations.  Oklahoma's offense is awesome but their own defense is pretty bad.

USC won the PAC 12 championship but did anyone even care.  Not only was the PAC 12 completely out of the Playoff discussion this year, but because of the Playoff bowl rotation this year, the PAC 12 champ won't even get to play at the Rose Bowl.  Traditionalists are dying!  Florida Atlantic capped their year of Lane with a resounding win in the Conference USA championship game.  UCF capped their remarkable turnaround with a win over Memphis in double overtime, and then watched their coach accept the head coaching position with his Alma Mater.  Boise State won the Mountain West against a resurgent Fresno State.  And Florida State finally got bowl eligible for the season!

There are a lot of good match ups for the bowl season outside the New Year's 6.  Plenty of entertaining games to watch over the holidays.  Some league races are still pretty close.  These bowl games will make a huge difference in the standings, especially with Alabama sneaking in and getting some extra points for all the people that chose them.

In the end, the Jacknife power rankings almost nailed the top 4 again.  Our ranking system had Ohio State #1 and Alabama #5.  Those 2 teams had the biggest debate about them for the final rankings.  If the committee would have went with Big 10 conference champ Ohio State instead of SEC west division runner up Alabama, we would have nailed all 4 for the second year in a row.  But 3 out of 4 isn't bad and having the other 2 hotly debated teams in the top 5 is a pretty good indicator that our scoring system is somewhat a good measure of how the teams are.