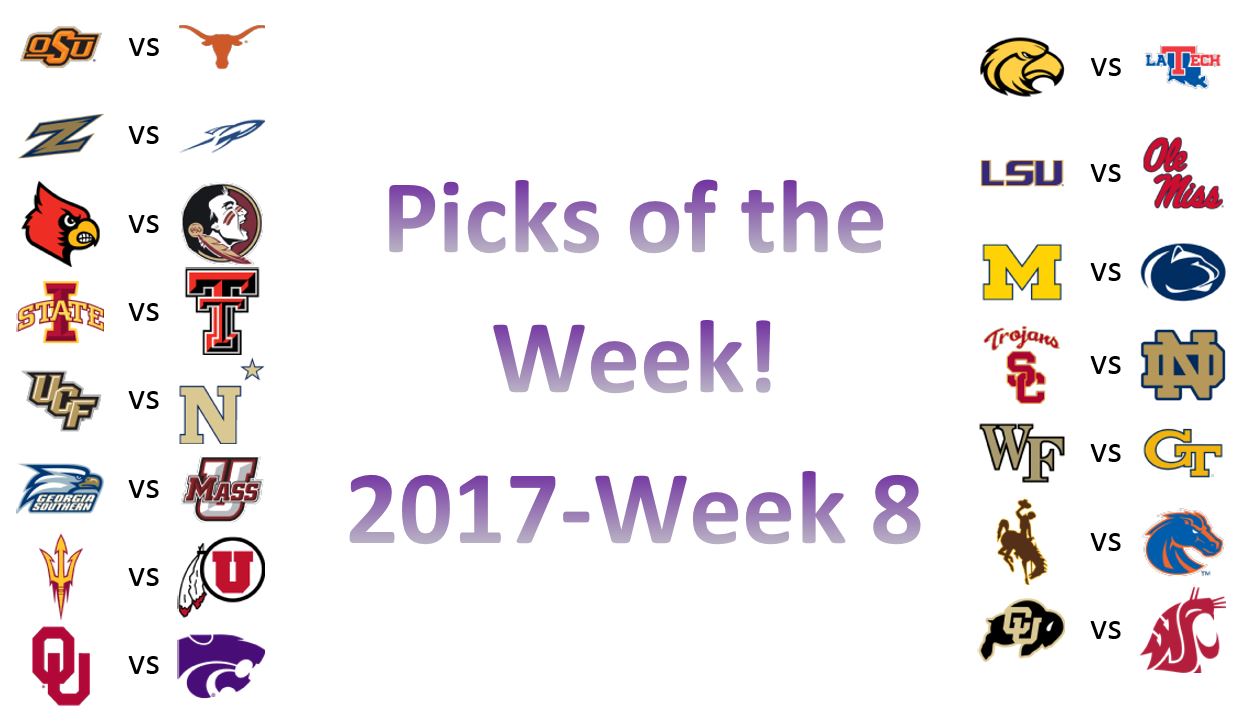 It was a good week for the pickers here at Jacknife.  With a weekend of big upsets, we managed to avoid the same fate.  Travis went 10-5 straight up and 9-6 against the spread redeeming himself from a horrendous week last week.  Allan went 9-6 straight up and 9-6 against the spread.  Kyle went 9-6 straight up and 7-8 against the spread.  This week's slate of games has a couple of very good prime time matchups with Michigan-Penn State and USC-Notre Dame.  The PAC 12 is cannibalizing itself this year and might knock itself out of the Playoff.  Stanford is picking up steam like they always do and could ruin the Washington schools' dreams of a Playoff appearance.  USC can probably afford their one loss, but a loss to Notre Dame this weekend would make it very difficult without some chaos to make it.

Nebraska is all by themselves in 2nd place in the Big 10 west right now.  I think that about summarizes the quality of the depth of the Big 10 this year.  The Big 12 is looking very deep with Iowa State having a solid year and Texas Tech being good as well.  West Virginia is going to make it tough for the top tier of the conference to go unscathed.  Even Texas has been on the verge of some big upsets all year.  The ACC is just upside down.  Florida State barely beat Duke.  Miami is tied for the division lead with Virginia.  Louisville is sitting in last place in their division and Clemson just lost to Syracuse.  NC State-Notre Dame is starting to look like a very important match up in a couple weeks.

Speaking of Notre Dame, they could really throw a wrench in the Playoff.  Coming off a year with only 4 wins, they are looking very competitive and their schedule sets them up for a Playoff berth given they still have 4 ranked teams to play this year.  Granted, they have lost their only matchup against a ranked team so far, but they did beat Michigan State by 20 which is starting to look better too.  Can you imagine the uproar if two Power 5 conferences get left out?  Hilarity!

I didn't forget about the SEC.  It's Alabama and Georgia and everyone else this year.  That is all.

Season Record - Against the Spread: