Week 8 Rundown – Firing On All Cylinders

Jacknife Sports Posted on October 24, 2017 Posted in Uncategorized No Comments 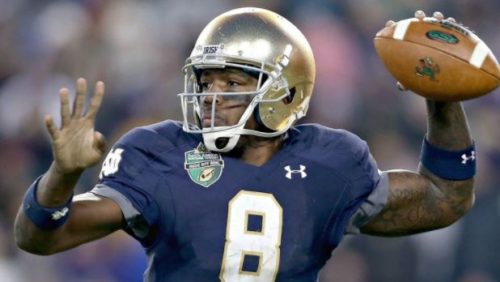 Alabama, Notre Dame, Georgia, Wisconsin, Penn St, and TCU have separated themselves from the pack.  Sure, there are other teams out there that can make their way to the top 4, but these teams seem to be the best of the best (dare I say…firing on all cylinders) headed into November.  On the opposite end of the spectrum….. get ready, because here comes the coach firings!!!  Any day now these lucky ball coaches will get to sit at home and collect their severance pay, lets start with the “sure things” – David Beaty (Kansas), Butch Jones (Tennessee), Bret Bielema (Arkansas), Mike Riley (Nebraska), Kilani Sitake (BYU).  You can bet that all of these guys will be gone at any minute.

Our friends over in South Bend have just rocketed into the Playoff discussion….they absolutely thrashed USC at home, you couple that with a “quality loss” against the Georgia Bulldogs and all that Notre Dame has to do now is win out!  Easier said than done, they’ll have to get past NC State, @ Miami, and @ Stanford…..if they win out with that schedule the committee would be stupid to not put them in the top 4, I don’t care what happens with the other teams.

Anyone know when Texas is going to win a close game?  Another tough loss for the Longhorns….when will it end?  One thing that I can predict with Texas is that Phil Steele will put the them on his Most Improved List after losing all of these close games.  Guaranteed!  Texas’s mirror image, Miami, won another close game in the waning minutes….maybe Mark Richt can give them some pointers on how to win in the 4th.  Michigan St continued to bore opponents to death for another win.  Houston kicked the week off with a shutout in the 1st half against Memphis, then forgot to take the field in the 2nd….giving up 42 points and a 17 point lead to lose by 4, yikes.  Bama did their thing and is clearly waiting to be promoted to the NFL.  Oklahoma seems to be a hot mess in every game, needed 22 pts in the 4th qtr to win over K State….I don’t see Oklahoma going thru the rest of their schedule unscathed.

Don’t look now, but we have ourselves a non-Power 5 showdown for a New Years 6 bowl between Central Florida and South Florida.  If South Florida get pasted Houston in their next game then they should meet UCF undefeated on the last week of the regular season, the likely winner taking a NY6 bowl selection.  UCF is clearly the better team.