It's always interesting to look back at how the picks of teams was distributed across the Jacknife leagues.  The 2016 season had 136 different entries.  There are teams at the top of the list that are expected like Clemson and Alabama.  They did not disappoint with their output as they were the top 2 scoring teams in the league.  But the most popular selection of all was South Florida.  That had to do with a combination of their reasonable price, 870, and their expected successful season.  Now, did everyone expect them to be the 12th highest scoring team in the league?  Maybe not.  But people were expecting a lot of them out of that value slot, which made them the most popular pick.  Boston College was the 6th most popular selection right behind Ohio State.  That might be a head scratcher, but they only cost 300.  Lots were hoping BC would be the 300 team that ended up exceeding expectation and getting a lot of points from that slot.  But they had a disappointing season even in that regards.

Those poor teams from the wide open country part of the nation, Wyoming and Idaho.  Not a single entry picked either one of those teams.  All they did was score 578 points and 512 points, respectively.  You could have done a lot worse spending 300 or 250 on a team.

So take a look at the data gathered below and draw your own conclusions.  I'm not sure it really means much in trying to crack the code of predicting which teams will do good each year, but it's fun to look back on it with the benefit of hindsight. 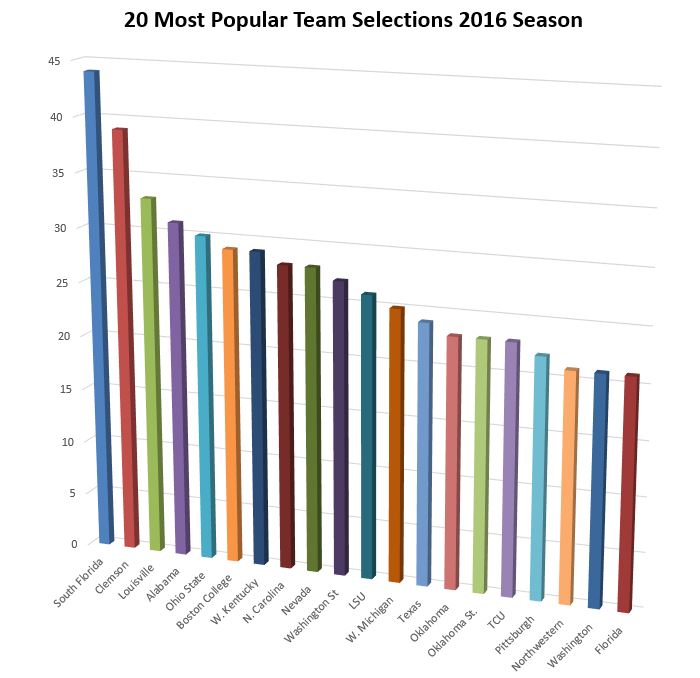