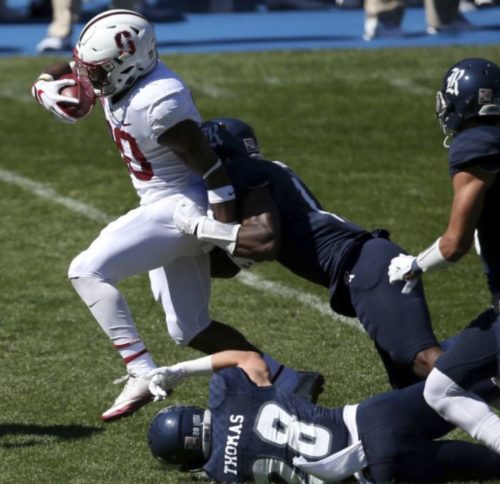 The 2017 college football season officially kicked off yesterday with 5 games.  That was truly a football appetizer.  While the first big weekend is still a few days away, it was great having games on that mattered again.  Stanford looked really good.  Granted, it was against Rice, but teams can’t execute that well against air in practice sometimes.  For one game at least, Bryce Love looks like he will be more than able as Christian McCaffrey’s replacement.

As for the other ranked team in action, South Florida, they got off to a really slow start.  They rebounded and won the game by 20 points, but it felt like a disappointment.  Leagues won’t be posted until all the entries are in so you won’t be able to see scores yet.  Here is a summary of the scoring from the first day of action:  Stanford – 106, Colorado State  80, South Florida – 61, BYU – 59, Hawaii – 46, Massachusetts – 12, Oregon State – 5, San Jose State – (-2), Rice – (-17).  South Florida was a very popular pick for all the entries so far.  Not the big score people were looking for, but it’s a decent number.  Stanford is off to a roaring start.

There are still 4 days to get entries in.  So obviously, all the teams that played yesterday are now ineligible to be picked for the remainder of the entries.  Remind everyone, get new people, and put in those entries in the next few days!