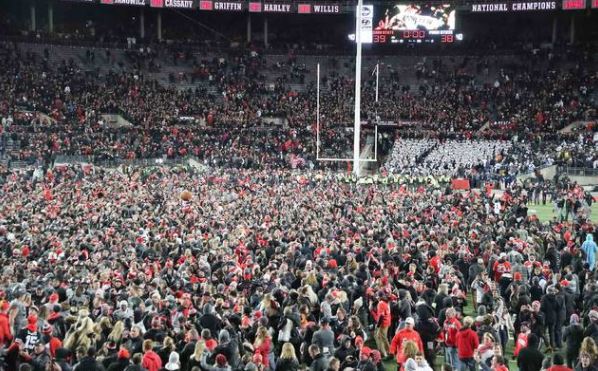 What an exciting weekend of football.  All the big games happened in the middle of the day.  That was kind of different.  Zombie Ohio State came back and beat Penn State after trailing by double digits the entire game.  Not only did they come back from the dead in that game, but they cannot be killed off in pursuit of the Playoff.  The most surprising thing?  The fans rushed the field after the game.  I thought that was below a fanbase of a team of the caliber of Ohio State.  Have no fear, Penn State.  Last year Ohio State lost to you, didn't make the Big 10 championship game, and still made the Playoff.  So you're probably sitting pretty.  Notre Dame is crashing the Playoff party after another top 25 win.  What a turnaround from a 4-win season.  Iowa State notched their 2nd top 5 win of the season knocking off TCU.  Best team in the Big 12 is the Cyclones?  It's the 10 year anniversary of the wacky 2007 season, so maybe we are heading for another one.  Georgia keeps on rolling and destroyed the Gators in more ways than one.  It was so bad they finally pulled the plug on Jim McElwain.  So long 2-time SEC east defending champ coach.

The weekly rundown waited to come out this week since it was the first release of the Playoff rankings this year.  As always, there are some interesting nuggets to take away and it gives insight into how this year's committee is going to view resumes.  And as always, this is not how the final 4 will look like at the end of the year.  But let's dive in and give some initial overreactions as we love to do in college football.

Alabama is not #1.  That was sort of shocking.  They have been steamrolling the competition but apparently the committee thinks Georgia is more worthy of the #1 spot.  I suppose that win over Florida State early in the year isn't nearly the feather in the cap that the Tide thought it was going to be, while Georgia has beaten the #3 team in the committee rankings in a true road game.  There is one consistent thing year after year from the committee - quality wins weigh much more heavily than any loss on the resume.  Clemson rounds out the top 4 despite their loss to Syracuse.  Again, quality overall resume.

It's highly improbable that these rankings will hold true at the end, but in this scenario, three Power 5 conference would be left out of the Playoff.  Just wait to see how fast the expand to 8 teams if this holds true.

It does look like head-to-head is holding true so far with Oklahoma above Ohio State and Ohio State above Penn State.  The Big 12 and Big 10 are looking ok if teams above them start to falter.  The PAC 12 is in serious trouble to make the Playoff.  Washington is their highest ranked team at #12.  Not looking good.  UCF is the clear frontrunner for the Group of 5 New Year's 6 bowl bid with Memphis nipping at their heels.  And how about a shout out to Iowa State and Mississippi State making the first set of rankings.  Everyone had them pegged for the bottom of their respective conferences.