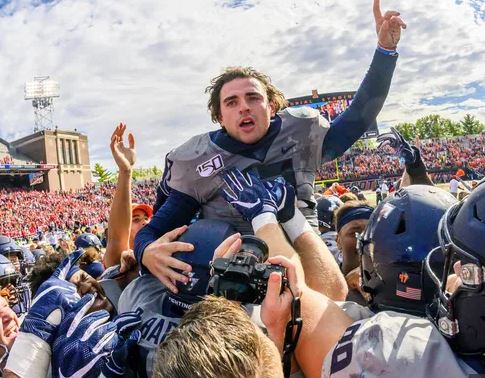 Shocker of the season so far.  Wisconsin goes down to lowly Illinois.  It looked like Wisconsin wasn't going to give up another point on the season, and yet they somehow lose as a 30.5 point favorite.  It looked like they were making a case as a strong Playoff team, but I guess they were looking ahead to next week when they take on Ohio State.  Ohio State might possibly be the best team in college football this year.  Their traditional stats and advanced stats are saying they are.  They are top 5 in both total offense and scoring offense.  They rank #2 in both total defense and scoring defense.  For you advanced stat nerds out there, they also rank #1 overall in S&P+.  They have the #1 defense and #5 offense in S&P+.  But this being college football, people will say they haven't played anybody.  Ok, that might me true up to this point, but they are destroying every team in their path so far.  Their schedule is backloaded with Wisconsin, Penn State, and Michigan still on deck.  They will have chances to show that even when they play "somebody", they are still good.

Oregon is now a legit Playoff contender too after everyone left the PAC 12 for dead as a Playoff participant.  Don't people overreact in this sport more than any other?  I mean, there is still half the season to play.  They came up with a very good road win at Washington.  If they can win out, they will have a good argument.

The SEC might become interesting.  Alabama's star QB, Tua Tagovailoa, hurt his ankle and had to have surgery.  They say it's the same injury and surgery he had on his other ankle last year, so his missed games could be minimal.  But with him out, Tennessee hung around until the very end.  If not for a dubious unnecessary roughness call on Tennessee that sustained a scoring drive for Alabama, they could have made the game very interesting.  But Alabama did what they always do and eventually found their groove and pulled away.  Alabama plays Arkansas, and then has a bye before taking on LSU.  Will he be back by then?

Other than that it was a pretty quiet week.  On to the second half of the season.