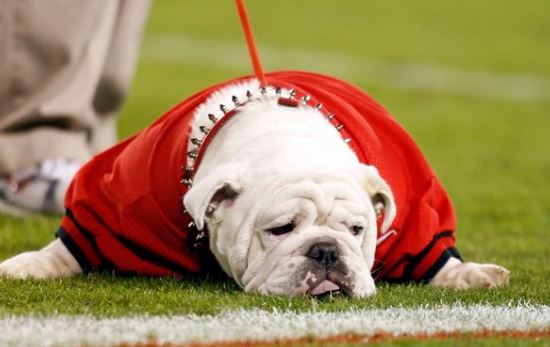 Just when you are least expecting it, college football comes out and throws in a little bit of chaos.  We knew it was going to be an entertaining weekend with Oklahoma-Texas, Florida-LSU, USC-Notre Dame, etc.  But the biggest result was South Carolina going on the road and upsetting the mighty Georgia Bulldogs.  The team that has been boasting it's the team that deserves to be in the Playoff even though they have 2 losses because they are one of the "best" teams in the country.  The team that has had Alabama on the ropes the past couple years only to choke each time.  This was merely supposed to be a speed bump on the way to another SEC east title.  I guess they weren't motivated to beat a team that was only 2-3 coming into the game.  Oh wait.  That's an SEC team's excuse when they lose a bowl game.  But in reality, it probably doesn't derail their Playoff chances all that much.  We have seen it before.  Ohio State losing to Virginia Tech.  Clemson losing to Pittsburgh.  Those teams overcame mind-boggling losses to still make the Playoff.  Before Clemson's undefeated season last year, there hasn't been an undefeated champion since the days of the BCS and 2013 Florida State.  It's just fun to have a little shake up at the top for a few weeks.

How about Wisconsin pitching another shutout?  It's the second least amount of points allowed in college football through the first 6 games in the last 40 years.  They had a bit of a down year last year, and we all should have figured it was an aberration.  They have been such a solid program for such a long time now.  But this being college football, there are always shouts that they haven't played anybody.  They go on the road to Ohio State in a couple weeks.  That should be a fantastic matchup of defense versus offense.

In case you missed the action on Friday night, Virginia lost to Miami.  There are now no ranked teams in the ACC except for Clemson.  If Clemson loses one time, how can they possibly make the Playoff playing in such a putrid conference this year?  It's kind of strange how the PAC 12 is not viewed in a very favorable light just because they don't have a clear cut Playoff contender.  But the ACC gets such a boost by just one team.  Although Oregon is building a case as a Playoff entrant.  They need some more chaos ahead of them, and they need to avoid a loss themselves.  But they are working their way into the discussion if such events unfold.

Oklahoma and LSU both won huge games against highly ranked arch rivals.  LSU shows that this newfangled offense of theirs is here to stay and can be effective against a very good defense.  Oklahoma's offense keeps humming along too.  Alabama is number 1 and they arguably might be the least impressive team out of the top 6 ranked teams or so.  They have beaten one ranked team, which was a barely in the top 25 Texas A&M team.  You would think their defense is so much better than Oklahoma's, but the Tide allows 17 ppg while Oklahoma is only a field goal worse at 20 ppg.  Of course they are in the SEC west with a backloaded schedule this year, so they will have opportunities to prove themselves against LSU and Auburn.  Actually the SEC west isn't quite as strong top-to-bottom as the past few years, even though it's still pretty solid.  Just up to this point they don't compare as favorably to the other top contenders.  Just saying.