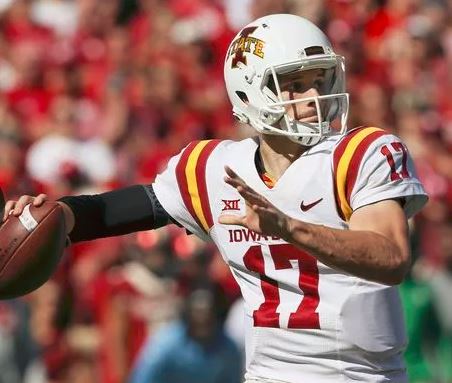 There are always these scenarios people come up with like, what if there are 5 undefeated Power 5 teams?  Who gets the Playoff bids?  It happens every year.  And every year we are reminded how darn hard it is to go undefeated for a whole season, even for the teams where you can't see a loss on the schedule.  This year Oklahoma and Michigan went down at home to double digit underdogs.  In Oklahoma's case, they were 30.5 point favorites against a team that started a quarterback that couldn't even get playing time at his junior college.  So now the articles are going to come out about the deathblow to their Playoff chances.  And you know what else that means?  Ohio State had their typical early season loss and will be creeping back up into the picture.  Even though Iowa State is clearly better than the Buckeyes at this point since they handled the Sooners.  Penn State is still sitting there in the Big 10 though.  They are looking very, very tough.  So now TCU is in leader of the pack in the Big XII.  Washington is cruising along in the PAC 12.  Washington State is announcing themselves as legit contenders.  Miami kept their hopes alive by the slimmest of margins.  San Diego State keeps making statements.  But there is still a tad over half the season to go.  Big rivalry games and conference championships still to go.

In other news, LSU won in the Swamp.  Clemson looked bored against Wake Forest.  Alabama finally didn't hang over 55 on a conference foe.  On Thursday NC State beat Louisville.  Looks like NC State-Louisville will be a huge match up.  NC State should have beat Clemson last year, but they missed a chip shot field goal at the buzzer.  Georgia's defense keeps dominating.  Western Michigan beat Buffalo in a crazy 7 OT game.  Western Michigan has now vaulted into the top 25 of the Jacknife Power rankings.  Purdue is keeping up its remarkable turnaround season.  For a team that has averaged 2 wins the past 4 years, that counts as remarkable.  Maybe Notre Dame isn't that bad this year.  That 1 point loss to Georgia doesn't look so bad as the only blemish so far.

The scores in the Jacknife leagues were not too high this week.  The upsets didn't help things.  Alabama didn't put up a ton of points and there were some high scoring teams on bye this week.  Some players in the draft leagues actually had some of the highest scores this week.  That doesn't happen too often.  If you have never done a draft league, I highly recommend trying it out next year.  You draft teams snake style so only one person can have a team in the league.  It makes you pick some garbage in the later rounds too.  It's a lot of fun.