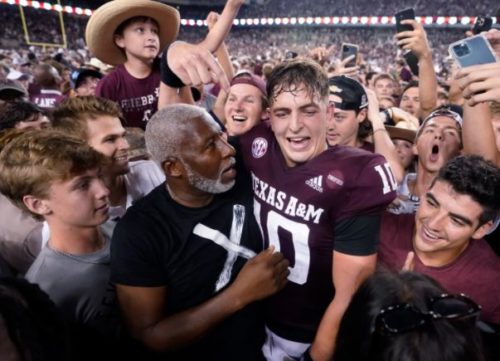 Wow.  Just when you think you have it all figured out.  It looked like it was going to be Alabama and Georgia and everyone else for the season.  Then Alabama goes on the road to College Station and loses on a last second field goal to Texas A&M.  This has really shuffled the national picture.  Alabama is definitely not eliminated from Playoff contention with a loss.  That would be foolish to assume.  And if they run the table and beat Georgia in the SEC championship, there could still possibly be 2 SEC teams in the Playoff.  This of course lessens that percentage.  If there was ever a year for a Group of 5 team to make it, this really could be it for Cincinnati.  They need to keep demolishing teams on the rest of their schedule, and they need Notre Dame to keep winning so that win holds up.  BYU lost a golden opportunity to throw their hat in the ring with a loss to Boise State.  But this year seems to have just gotten very interesting, but in the end it will probably still be what we all expected.  Ohio State is already back up to #6 in the country.  Ohio State, Michigan, Penn State, and Michigan State still have their round robin to go, with Iowa probably waiting for them in the Big 10 Championship.  There are five Big 10 teams in the top 10, but it just feels inevitable at this point Ohio State will come out on top.  Oklahoma is perilously sitting at #4 still.  They needed a miracle comeback to beat Texas and remain undefeated.  They feel like they are on the verge of losing any week.  Oklahoma State is still sitting there undefeated just outside the top 10.  They might emerge as the Big 12 champion.  And the PAC 12 has pretty much faded into the background.  At least Oregon is still a thought.  The ACC is just completely irrelevant this year.

Another crazy game was the Arkansas-Ole Miss game.  I hope everyone took the over on that one.  The final score ended at 52-51 in favor of Ole Miss after Arkansas went for 2 with no time on the clock to try to win the game.  Remember, the SEC is where they play defense and big boy football.  We aren't even talking about Georgia after they went on the road against a top 20 foe and won by 24 points.  I guess consistent dominance won't get you noticed in this season.  But Georgia has rightfully risen to #1 in the polls after this weekend.  Could this be the year they finally end their national title drought?  Michigan won a tough road game in Nebraska.  Since that debacle of an opener against Illinois, Nebraska has played pretty good.  They just cannot win the close games.  They are one of those teams whose record does not reflect their ability - probably why Scott Frost is on the hot seat.  Notre Dame went on the road and won a tough one at Virginia Tech.  That is always a tough place to play.  There were a lot of road tests this past weekend.  Wake Forest needed OT to win on the road at Syracuse.  Oregon State lost at Washington State which is a tough blow to their PAC 12 north aspirations.  It was a fun weekend, and most teams have now played half of their schedules.  The second half is hopefully just as fun.