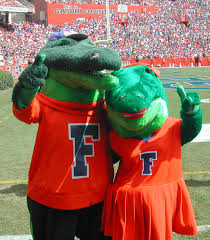 The big game of the weekend pitted Auburn on the road against Florida.  In front of a raucous crowd at the Swamp, reminiscent of the title winning days, the Gators won a very sloppy game over the Tigers.  Now Florida gets to go play LSU.  The top of the SEC is very good this year with no breaks, even for Florida who plays in the weaker east division.  Alabama and Clemson were both on byes this week, so the week felt very uneventful.  The most exciting game of the weekend was probably the Tulsa-SMU tilt.  SMU overcame a 4th quarter, 21-point deficit to tie it in regulation and then win in triple overtime.  It was very exciting.  There are still lots of exciting games out there even if not every single game has national/Playoff implications.  For some people the only thing that matters is the Playoff.  That's just silly.  They are missing out on so much.

UCF lost to a conference foe for the first time in forever on the road at Cincinnati.  Army lost to Tulane.  Army looked like a team that was going to coast to double digit wins this season with how their schedule looked heading into the season, but it has been a struggle so far.  Wisconsin had another shutout.  It was only Kent State, but still it's very hard to shut out a team even in a mismatch like this.  Iowa and Michigan played the most stereotypical Iowa-Michigan game there is with the Wolverines winning a blistering 10-3 game.  And all 10 of their points came in the 1st quarter.  Go read that drive chart for the game.  Ranked Oklahoma State went on the road and lost to Texas Tech.  #15 Washington went on the road and lost to a Stanford team that has been very underwhelming this season.  I think a few of these results show how hard it is to win on the road against conference foes.  So Texas winning by 11 at West Virginia is actually no small feat.  It shouldn't be taken for granted they will win a game like that.

It truly was a pretty quiet week.  Week 7 has some very high profile matchups, so the intrigue factor should be ratcheted up for this weekend.