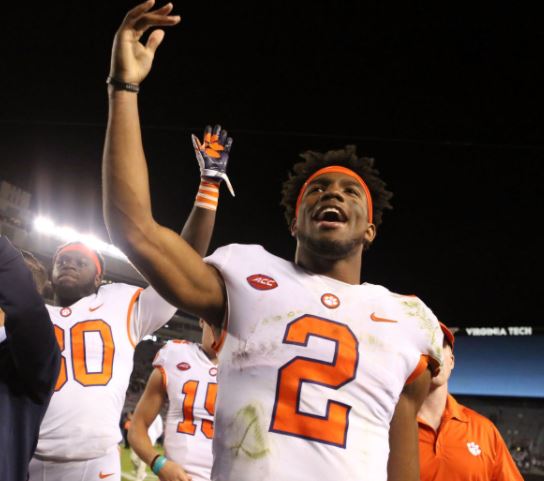 This is the week we start to see the contenders separate themselves from the pack as the calendar turns to October.  Are we headed to the rubber match of Alabama-Clemson for the national title?  It sure seems that way.  Another week, another "challenge" to Clemson thrown aside.  With Florida State down this year, it looks like there is no one to challenge Clemson for a Playoff spot.  Maybe Miami?  I wouldn't count on it.  Alabama is treating the entire season like a tune up so far.  They are making SEC teams look like cupcakes.  They are actually beating the SEC teams worse than the cupcakes on their schedule.  The only other team that has clearly risen above in the SEC this year so far has been Georgia.  Maybe they can derail the Tide in the SEC championship.  It's not looking promising despite the awesome defense the Dawgs have been playing this year.

If you had week 5 in your pool for the USC hype train derailing, please collect your winnings.  There were some signs that they just weren't that good.  Western Michigan ran all over them.  They had to come back and beat a Texas team in overtime that got destroyed by Maryland.  Sam Darnold was throwing interceptions at an alarming rate.  It's all come to a head and Wazzu beat them at home on a Friday night.  Doesn't USC always lose a weeknight game on the road?  We are looking at our 2nd straight year of a winner-take-all Apple Cup match up.  Now Washington State has thrown its hat into the playoff mix.  But they were a 21-point-deficit-with-8-minute-to-go miracle win away against Boise from just being another team in the muddled middle.  But Stanford is still in the mix despite their loss to USC.  They only got 300 yards rushing from Bryce Love this week.

Oklahoma State held on to win on the road at Texas Tech.  Lots of seasons go to Lubbock and die.  That isn't an easy place to win and they made the plays when they needed despite their kicker doinking a couple of 19 yard field goals off the uprights.  That's going to be a fun race especially with the conference championship game coming back.

Wisconsin held off an always tricky match up against Northwestern.  The Badgers apparently make the best half time adjustments in the land.  They just come out and destroy teams in the second half of games.  Penn State took care of business against Indiana.  Saquon Barkley is scary good.  Are teams even going to bother kicking the ball to him anymore?  It's hard enough to stop him when he does his normal job of rushing the ball 17 times per game.

The Jacknife power rankings always seem a little strange the first few weeks of the season.  It's totally based on the scoring system which only takes into account how teams perform.  It does no projecting or determines who "should" be the top teams.  With the season a month old now, they start to trend just like the traditional polls.  Right now Alabama, Penn State, Washington, and Clemson are sitting in the top 4.  That feels about right.  The scoring is matching what our eyes are seeing.  Some teams have fallen just because of byes.  But it all evens out in the end.

Talking about separation Saturday, usually we start to see some people start running away with the leagues in Jacknife, but there are a lot of tight races this year.  People are making up a couple hundred points every week.  Don't think that you're out of it yet.  One good week can vault you right back into it as we have seen all season.