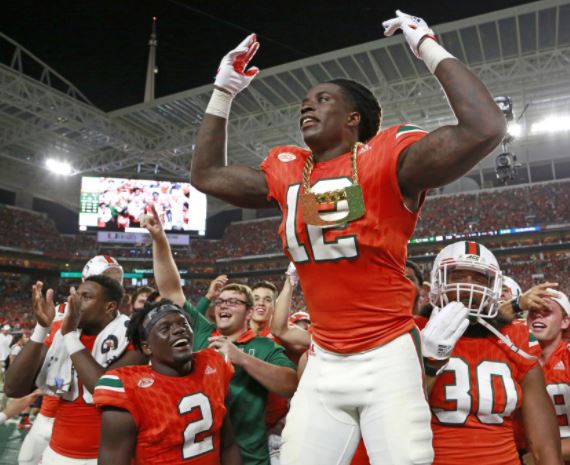 Already the seeds of chaos have been planted.  Last week we were talking about how any of the teams left for dead for the Playoff would need some chaos to get back into the conversation.  And it has already happened.  The #1 and #3 teams in the country not only lost, they got destroyed in their games.  Georgia and Notre Dame can give up their top 4 rankings this week.  All this does is leave the door open for the zombie Buckeyes to start creeping back into the conversation after their dismantling of a probably-overrated Michigan State team.

Oklahoma has put themselves in a good spot with a throttling of TCU.  The easiest preseason prediction of the year is closer to coming true.  The Big XII is going to knock their Playoff contender out the running with their re-established conference championship game.  As of right now, we are on course for a Oklahoma-TCU rematch.

Miami is "back."  That's all we are going to hear about the next couple weeks.  Got to love it when those stories hit the internets.  It's right up there with them trying to find a team's ranking among the best teams of all time before they go out and lose the championship game.

But I don't know if there can be enough chaos for a PAC 12 team to make it all the way back up to the top 4.  They have really put themselves in a tough spot this year while they beat up on each other after most of the country is in bed.

At least Duke, Kansas, and Kentucky fans can delight in the fact that there is the Champions Classic matching 4 teams against each other in a field that is more loaded than most Final Fours.  And they get to watch the latest CFP rankings in between the games while thinking to themselves, "Thank goodness it's basketball season!"  Michigan State is there too, but they at least have a good football team to root for.

There were some very high scores across the leagues this weekend.  The standings had some pretty good movement.  There are only a couple weeks left where just about everyone is playing, so there is still time to make up some ground in the standings.  After the next couple weeks, and championship weekend is here, it will be limited who can move up the standings until bowl season starts.  It will be a good finish!