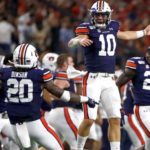 An opening week that only had one game between ranked teams ended up providing plenty of intrigue.  There were many instances where it was shown age is but a number.  True freshman quarterbacks making 4th quarter comebacks, senior citizen coaches winning football games.  One of those true freshman quarterbacks is Bo Nix who engineered a second half comeback against Oregon that included a last second touchdown pass to win the game.  Auburn was down by 15 early in the second half before scoring the last 21 points of the game.  Of course the defense also had to prevent Oregon from scoring to make the comeback happen.  They did and the offense made plays when it counted.  This will be big for Auburn moving forward, and a huge missed opportunity for Oregon.

The other impressive true freshman quarterback was Hank Bachmeier for Boise State.  In a game that got switched from night at a neutral site to a true road game in the middle of the afternoon in Tallahassee, he showed unbelievable poise and competitivenss.  Florida State came out on fire the 1st half and was up as much as 31-13.  They also were dominating on the defensive side of the ball holding Boise to mostly field goals and getting to the QB.  But he never lost confidence and Boise outscored FSU 17-0 in the second half.

For the other end of the age spectrum, Mack Brown led North Carolina to a win over rival South Carolina that also included a big second half comeback.  Down 20-9 heading into the 4th quarter, UNC scored 14 unanswered to win 24-20.  That is not good for South Carolina as they have an incredibly difficult schedule the rest of the way.  And at least for one week Mack Brown showed the game hasn't passed him.

For the most part the big schools took care of business like they should have.  The one glaring exception was Tennessee.  They were 26 point favorites at home against Georgia State.  There are all sorts of stats saying how bad and rare this was for Tennessee to lose this game.  And unlike the huge upset back in the day of App State against Michigan, there wasn't a signature play that created the huge win like a blocked field goal.  Georgia State straight up controlled that game.  Nothing like paying a team $950,000 to come in and beat you.

USC was dealt a blow as their promising true freshman quarterback is lost for the season with a knee injury.  Oklahoma just keeps on rolling plugging in any quarterback in their system.  Ohio State scored 28 points in about 5 seconds against FAU and coasted the rest of the game.  LSU looked good for at least one week with their "modernized" offense against an overmatched foe.  And Maryland continued their proud tradition of looking truly awesome in their week 1 game.

It's good to be in the swing of the season now.  Week 2 has a couple of really big games with Texas A&M- Clemson and LSU-Texas.  And there will always be interesting story lines coming out of the week.  On to another exciting season!