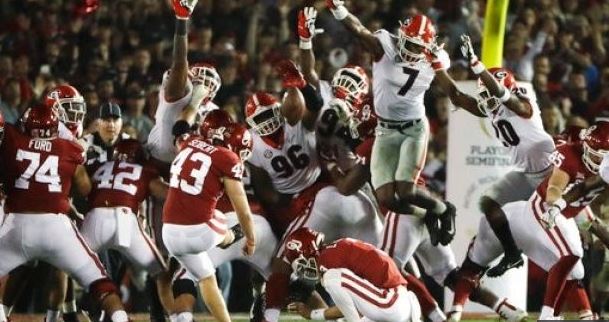 The season is almost a wrap.  The bowl season this year was mostly underwhelming.  Most all the games were blowouts.  New Year's Day had some good games to reverse that trend.  People tend to remember the games with the biggest stakes the most, so the bland taste of the bowl season was probably mostly erased with that highly entertaining Rose Bowl.  Georgia and Oklahoma was back and forth, big play for big play, lack of defense for lack of defense.  The game produced 102 total points and over 1,000 yards of offense.  As with most of these big games, special teams always factors in more than you think.  What a horrible squib kick at the end of the first half by Oklahoma that allowed Georgia to tack on 3 points before half.  And then Georgia blocked a field goal in the 2nd OT to set up their game-winning score.  The stars delivered in that game.

The Alabama-Clemson game was the polar opposite.  That game was all about defense.  Alabama won the game despite only having 261 yards of offense.  It helps to hold Clemson under 200 total yards.  This game came nowhere close to delivering the performance and drama of the past two years between these teams.  But the end result is an all-SEC title game.  The bowl season pretty much mirrored the SEC for the season.  They get 2 teams in the championship, but the other teams went 2-5.  Very top heavy this year.

New Year's Day had another entertaining game.  UCF came back from a 3rd quarter deficit and beat Auburn.  If anyone has a gripe about the Playoff system, it's probably the Group of 5 teams.  UCF did everything it could in the regular season (highest scoring team in the nation, undefeated, conference champ of the best non-Power 5 conference) and it didn't even sniff the Playoff.  The BCS era was probably more friendly to non-Power 5 teams championship chances.  Kind of ironic.

So which teams will get a bump in the preseason rankings because of a bowl performance?  Who will take a hit because of a bowl performance?  These games largely don't mean much, are played under weird circumstances, and yet people put a lot of stock into them.  It feels like the entire PAC 12 is going to take a hit considering they didn't put a team in the Playoff and only won 1 bowl game.

There is still one game left to be played.  The SEC will once again be able to claim they produced the national champ.